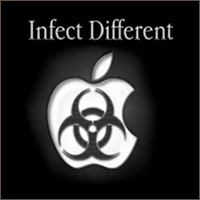 The other day I was following an intense discussion on some geek website about the endless battle between Mac and PC users. Of course taking the mickey out of someone’s preferences is funny as hell but at times things do get old. I was tempted to jump in and have my say but I would’ve allowed emotions to cloud my judgment so I kept quiet and moved away from it instead.

There are limits and obviously some were been crossed big time by people who refused to respect each others predilection and fuel the feud. Rumour has it that there has been a Mac trojan (there’s now a second variant) threat lately which is ‘hidden’ in some fake anti-virus software for Mac. It’s using malicious SEO poisoning to attract visitors for downloads. For years Mac users have been free of any potential threats although there have been a few worms in the past that were -at the time- mainly passed on by unformatted Zip discs. Rogueware is commonly seen on Windows computers, but until now has been rarely encountered on the Apple Mac platform. But that -and that is a big but- doesn’t mean one should not be cautious.

Whether to be cautious or not, shouldn’t depend on what operating system you’re using, Macs are just as vulnerable as any other system. What I didn’t like about this discussion was the mere assumption that Mac users are being ignorant *not me* and arrogant *not me*. And it was ‘payback time’… The discussion turned into entirely childish and immature finger-pointing and word-bashing. I guess I was disappointed that a website owner -who claims to be running a successful geek-blog read and followed by a vast group of people with a diversity of different OS backgrounds- writes a post that fuels an extremely hostile approach, by publishing a title like: ‘Hey Mac users >>> Boo-yah’ .