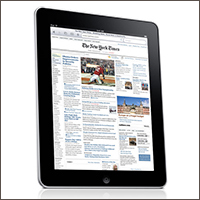 I don’t know what to think of the new iPad… to be honest, to me it looks like an iPhone for the farsighted. Yes I’m a Mac addict but these are the type of products that I can’t really relate to. Of course it looks sleek but I can’t think of a reason why I’d want to buy this ehrm… PDA, ‘computer’, eReader, grown-out-of-proportions iPhone, whatever it’s supposed to be.

I’ve used the internet on my mobile phone about five times because I was in a situation where I needed to look up something important like an address or I needed Google maps. However, it took me at least 15 minutes to struggle through the browser interface to find what I was looking for. Not many websites are built to be viewed on a mobile phone and people don’t seem to realise.

And even though the iPad offers a different experience I still wouldn’t want it, simply because I don’t see the use of it. It seems rather limited compared to the CPU setup I have for daily use, so I wonder: what’s the added value? And… did someone ever think of all the fingerprints it will leave on the screen? Guess not

‘Despite the same oleophobic coating found on the iPhone 3GS, the iPad’s screen did pick up fingerprints like mad. In fact, a friendly Apple gadget handler had to keep wiping it clean for us, smiling politely at our jokes about how the tech press is at least 30 percent more oily than the average citizen.’ Source

﻿
© 2018 All Rights Reserved. Developed by Dessign.net