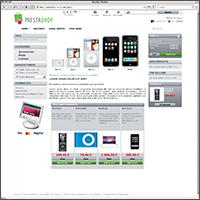 I’ve been test-driving the latest software release of PrestaShop and I must say I’m impressed so far by the user interface which seems pretty straightforward. PrestaShop is open source ecommerce software and is great if you are willing to sort things out by yourself: it’s the ‘Ikea flatpack’ version of ecommerce software. If you’re not the adventurous and exploring type and if you need a ready out-of-the-box product than I wouldn’t recommend PrestaShop.

I haven’t had to turn to the support forum for help yet but from what I read, some people out there get pretty frustrated by the lack of response. In my opinion one has no right to complain really when what is offered is for free. People have spent precious time on developing the software and if you can’t appreciate that then it’s time to turn somewhere else… Previous to installing the PrestaShop software I tried Magento which looked promising but when I did a bit more research I found out there were significant speed issues especially when running the software on a shared server.

I must admit I wasn’t impressed with the performance either and each adjustment I tried to make in the back end took several minutes reload time and I wasn’t even doing complicated stuff. It was utterly disappointing… So I moved on to PrestaShop because I’m not willing to spend money on a dedicated server that also needs certain specifications in order to have a smooth running speedy Magento ecommerce shop. I won’t be using the software for online shops that offer hundreds of items so it doesn’t have to be all that complicated.

The only downside of PrestaShop was after the installation when I wasn’t able to log on, I found a way to fix it though by searching the forum. The positive side is that compared to Magento’s 65Mb installation PrestaShop is a lightweight at 6.5Mb

Over the last weeks I have been exploring the interface on and off and I’ve been looking for manuals to read into the structure of Prestashop to see how it works. Next step will be adjusting the design which to me is the most interesting step, I’ll write more about this in a next post.