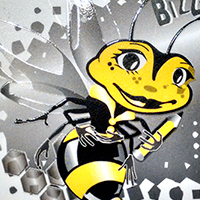 I had a dispute with a printer a while ago because I wasn’t happy with the print results. I’d designed a letterhead and business cards, both had black, yellow and brown colours and the business cards had an extra spot UV. The letterhead was fine although it had what we call in Dutch, a ‘Lumbecked spine’: it was glued together at the top which is not common practice in the Netherlands where they wrap a package of 200 sheets tightly in plastic and seal it to protect it before they send it off.

The brown colour that I’d used for the letterhead was a dark one but it was still visible and it still appeared to be ‘brown’. Unlike the business cards where there was no brown visible whatsoever (see my logo at the top compared to the one on the left). It looked like they’d forgotten to print the red, it was just black and yellow. I’d used a brown gradient background as well which contained no brown at all. Although I wasn’t happy with the results, it was somehow to be expected. It was an extremely cheap printer.

What I found odd about the whole thing is that when I complained about it I got this reply telling me that my monitor wasn’t calibrated like theirs and that my brown appeared grey on their monitor. I told them that in all those years I’ve never met a printer who compared RGB colours to actual print colours. I’d chosen the colours that I’d used from an actual colour guide and sent them a pdf file which they somehow managed to distort as well: the gradient I’d used was not in the right position.

The proof which they sent, after I’d showed them how to correct things, was approved by me. It clearly shows brown in both the letterhead and business card so why wasn’t it showing on the prints? While my arguments were totally valid the printer wasn’t willing to admit to their mistakes. The colour issue was referred to as ‘minimal variations in colours’ which they could not be held responsible for. According to them they didn’t offer colour matching on paper based items.

Colour matching -in my opinion- is one of the most important aspects of printing because it affects the final result of the printing process. Yes it does happen sometimes that colours are slightly different but not like what I described above. My previous experience (first time, for a client with a small budget) with this printer was fine, which is why I decided to use their services again. This time it was an endless communicational struggle where they refused to answer emails and phone calls.

After searching online for reviews I found out I wasn’t the only one having problems with them, there were many similar complaints and of course none of them resolved. In the end I decided to let go, it wasn’t worth the aggravation and at least I tried. Next time I definitely will choose quality over price.