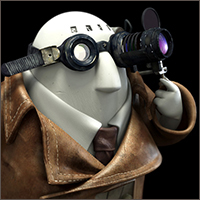 The wonderful sculptures of Belgian artist Stephane Halleux are remarkable to say the least. He started his career at an animation film studio first as a colorist, later as a layout artist. His first exhibitions were such a success that since 2005 he has devoted all his time to his sculptures. According to Coilhouse magazine and blog, Stephane Halleux is now trying his hand at a new medium: animation. Now why doesn’t this surprise me?

To quote Coilhouse magazine: “In response to countless questions, pleas, and threats he’s created a digital character after one of his leather and scrap metal sculptures, Monsieur Hublot. There is no word yet on the release date of the eponymous, seven-minute short, but we do know that Mr. Hublot [named thusly as a nod to Jacques Tati’s tragically inept Monsieur Hublot] is a bachelor accountant suffering from a host of obsessive-compulsive ailments. He lives in a small, gadget-packed apartment with his robotic dog, loves his leather trench coat and despises noise.”

Steampunk was influenced by, and often adopts the style of, the 19th century scientific romances of Jules Verne, H.G. Wells, Mark Twain, and Mary Shelley. It’s a sub-genre of science fiction, alternate history, and speculative fiction that came into prominence during the 1980s/early 1990s. Specifically, steampunk involves an era or world where steam power is still widely used—usually the 19th century and often Victorian era Britain—that incorporates prominent elements of either science fiction or fantasy. Works of steampunk are often based on a Victorian perspective on fashion, culture, architectural style, art, etc.

All artwork and images are © Stephane Halleux

« Charlie At The Factory » Sandwich