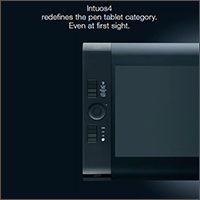 This is what makes my heart skip a beat… Wacom has finally developed a Bluetooth Wireless Intuos tablet. I’ve been waiting for this for a very very long time, it means less ‘spaghetti’ lying around on the floor causing problems when I need to move something and rewire all the peripherals. Less annoyance and another wireless item crossed on the wish list: brilliant! It comes at a steep price of €399,90 and will be available from the end of March 2010, but I’d rather spend money on this little gadget than on the iPad!

According to the Wacom website it features 2,048 levels of pressure sensitivity, customisable ExpressKeys™ with OLED displays and new radial menus that enable fast access to shortcuts. Scrolling or zooming can be done with a fingertip thanks to the Touch Ring with toggle functionality. As all Intuos4 pen tablets, the Intuos4 Wireless comes with the Intuos4 Grip Pen, the ExpressKeys as well as the Touch Ring. The new Intuos4 Wireless pen tablet with Bluetooth® wireless technology lets you relax in you favorite working position or move about freely up to 10 meters from your computer. Enjoy the freedom of working “unattached” from your Mac and reducing cord clutter.

The only thing that worries me is the battery: rechargeable batteries don’t have eternal life. I have a wireless keyboard that I use with rechargeable batteries which I temporarily replace with common batteries in case they need to be charged. So I wonder if the Wacom battery can be replaced at some point or if you would have to buy a new tablet when it’s dead. Something that shouldn’t be overlooked.